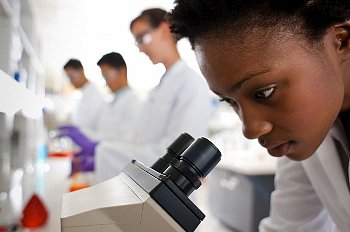 I walked in on my first day of work with very few expectations. The truth of the matter is that as a scientist I don’t usually see too many black people at workâ€”honestly I don’t generally see any. As an undergrad I worked in a cancer genetics lab for four years and the only color I saw were brown mice and janitors. Therefore, on my first day when I looked to my left and saw a young white man about my age, and to my right saw a not so young white man I just sighed internally and kept it moving.

At this early point in my career I basically have my work persona down to a science, no pun intended. I know that we will not be discussing BeyoncÃ©’s performance during halftime at the Super bowl and that’s really okay with me. I understand that these people live altogether different lives than me. What I did not plan on facing at work was the young white man I encountered on my first day.

I do not know what it is about my presence in the lab that irks this man’s spirit but he tries my patience daily. He tries my patience DAILY. It seems as if we are in some constant competition of intellect, which I know I didn’t sign up for. The only funny part to this scenario is that the harder he works to prove himself my superior the more foolish he appears to the lab at large. Every test result and every sample assigned has been turned into a battle of paramount proportions. This man actually thought it was a good idea to compare the time it took both of us to complete microscope work. All I can ask is, why?

The competition is irritating but I can acknowledge that it’s harmless, although if he catches me on a bad day with the comparisons I will not be responsible for my rebuttal. What really grates on my nerves is the way that he talks to me. I understand that I am on the shorter, more voluptuous, and darker side, but apparently this man has me confused with the character Minnie from the movie The Help.

As the two youngest persons on staff our supervisor often asks my young coworker and I to work later in the day when we have extra work that needs to be completed. I don’t mindâ€”I understand that the rest of them have families and PTA meetings to get to in the evenings. Last weekâ€”everyday last week- we stayed in the building together until 8pm. As soon as the rest of the department left his tone of voice changed and this man began talking to me as if I worked for him, and not with him. He asked me to get him a pen from across the room while I was sitting 2 feet away from him. I’m sorry!? The only silver lining was his facial expression when I calmly said no and continued typing. He was shocked; beyond shocked, and that thankfully ended any conversation for the rest of the day.

Our most uncomfortable and disrespectful interchange came some time ago. My Nigerian roots are generally interesting to a lot of people. My coworkers and manager are no different. On a particularly slow day at work my manager asked me if I intended to marry an African man. Apparently the young man in my lab took that simple question as an opportunity to express to me how he feels about Africans in general. He launched into a five minute dissertation about why I must not marry an African. This narrow-minded man told me that Africans are ill-educated, unclean, AIDS-ridden, most likely using my naturalized citizenship as a means of leaving their impoverished country and coming to America to use their tax dollars for free healthcare.

I saw red. It took everything for me to stand up behind my desk and calmly inform him that Africa is a continent and not only was he incorrect on every point but he’d propagated every stereotype foreigners have about white America. Not only is my country beautiful, it is RICH. I explained to him that despite being pillaged for its resources Nigeria still holds strongly to its culture. Despite what he thinks not every foreigner dreams of coming to America.

I hate the position he put me in because during his speech the entire room was watching me, waiting for me to go off. I refused to turn into an “angry black woman.” If my job has taught me anything it is composure. It is hard being a young educated black woman in this society. Every day at work I look around and there is no one like meâ€”no one who shares my interests, my goals, or understands my upbringing.

About the Author:
Stephanie is an young aspiring writer from New Jersey, currently residing in Columbus, Ohio and studying at The Ohio State University.