Where Are Your Shoes? 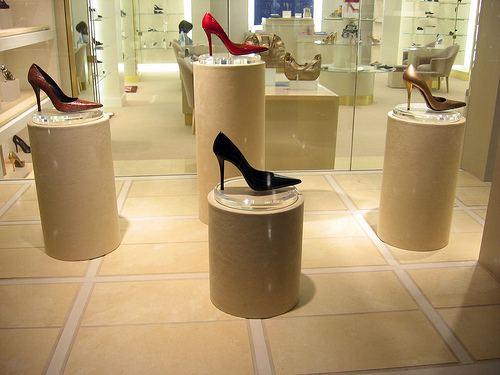 I didn’t mind driving to Nordstrom at the Cherry Hill Mall on Monday to get my shoes because the drive was short; but when I arrived they didn’t have the shoes that I wanted.Â  The only other Nordstrom was at King of Prussia (mall) and I hate that drive; but on Monday they had a few pairs left and I really wanted those shoes, but just not bad enough to drive those extra miles.Â  So I took a gamble and said that I would wait until Tuesday.Â  Once Tuesday came, IÂ drove out to King of Prussia only to find that they didn’t have my shoes out on display and it appeared that they didn’t have any in stock.

I became disappointed and upset with myselfÂ  because I really wanted those shoes; but I didn’t want them bad enough to driveÂ out there on Monday.Â  Now it appeared that someone else had purchased the last pair and although I didn’t see any out on display, I just had to ask the salesperson if they had any in stock.Â  Thank God they had one pair in the back and they were the perfect color, fit and size.Â  The salesperson informed me thatÂ  they don’t place shoe styles with only a few pairs in stock out on display. You have to ask for them and it made me think about how God is with HIS daughters.Â  Because we are so rare and important to HIM, HE doesn’t put us on displayÂ nor does HE want us putting ourselves on displayÂ for any man to try on for size.Â  HE keeps us in the back, hidden under HIS wings, and if a man desires to have one of HIS daughters he has to take some extra steps.Â  He has to do those things that he doesn’t want to do.Â  He has to give up those things that he doesn’t want to give up in order to show God that he’s serious and capable of caring for one of HIS precious daughters.Â  He has to really be willing to travel those extra miles in order to get to that place where God is in order to ask for her; then and only then does God lift HIS wings to reveal her,Â bring her from the backÂ and release her to him in the perfect color, fit & size.

A wise woman once said, “A woman should be so hidden in GOD that a man has to seek GOD in order to find her.”Â  So my question to you todayÂ is,Â  “Are your shoes hidden or are they on display?”

Where are your shoes?