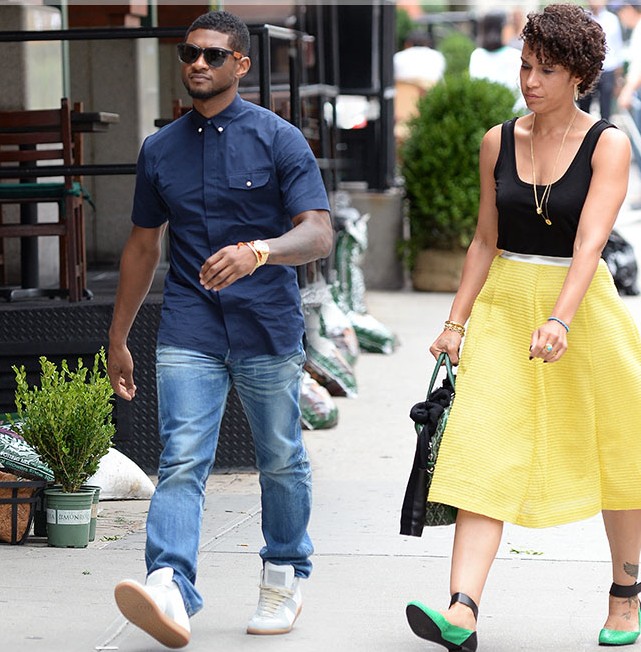 R&B superstar Usher (full name Usher Terry Raymond IV) is reportedly engaged to his manager girlfriend Grace Miguel. The pair has been dating since 2008 (getting together right after splitting from first wife Tameka Foster). Engagement rumors were sparked after Miguel was recently photographed with what appeared to be an engagement sparkler on her left ring finger! Apparently, the couple is planning to have a very “low-key” wedding ceremony. Usher’s rep has yet to comment on the story. The 36-year-old “The Voice” coach has nothing but good things to say about his future wife. 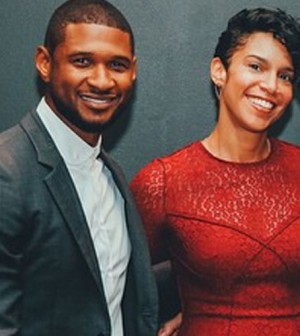 “I have an incredible partner and manager,” he told Billboard. “She has helped me through some of the hardest times in my life and my career. She’s someone who’s been able to support and understand all of who I am. Not just as a dancer or as a performer or as a singer, but as a humanitarian and a business man and as a person.”
Usher first rose to fame in the early 1990s with the release of his self-titled debut album. It featured the singles “Can U Get wit It,” “Think of You,” and “The Many Ways.” The album has sold over 500,000 copies to date. His second album My Way spawned his first official U.S. number-one hit, “Nice & Slow.” The follow-up album, 8701, produced the Billboard Hot 100 number one hits “U Remind Me” and “U Got It Bad.”
Usher’s 2004 album, Confessions cemented his place in music history. It sold over 20 million copies worldwide, bolstered by its four consecutive Billboard Hot 100 number one hits: “Yeah!,” (epic song by the way, another one my all-time favorites) “Burn,” “Confessions Part II,” and “My Boo” and has been certified diamond by the RIAA. His next two albums Here I Stand (2008) and Raymond v. Raymond (2010) both debuted atop the Billboard 200 and produced the Billboard Hot 100 number-one singles “Love in This Club” and “OMG.” A follow-up EP, Versus, was released in July 2010 and produced the smash track “DJ Got Us Fallin’ in Love.” His seventh studio offering, Looking 4 Myself (2012), had more of dance-pop feel and didn’t sell as much during the first week in comparison to his other past albums. Usher and ex-wife Foster had two sons together: Usher “Cinco” Raymond V and Naviyd Ely Raymond.
RIAA ranks Usher as one of the best-selling artists in American music history, having sold over 23 million copies in the U.S. alone. Wow. That is one heck of a feat and definitely well-earned considering how multi-talented he is. To date, he has sold over 65 million records worldwide. Usher has won numerous awards throughout his career, including eight Grammy Awards. Billboard named him the second most successful artist of the new millennium, with Confessions being ranked as the top solo album of the 2000s. Usher has attained nine Hot 100 number-one hits (all as a solo artist) and has attained eighteen Hot 100 top-ten hits.