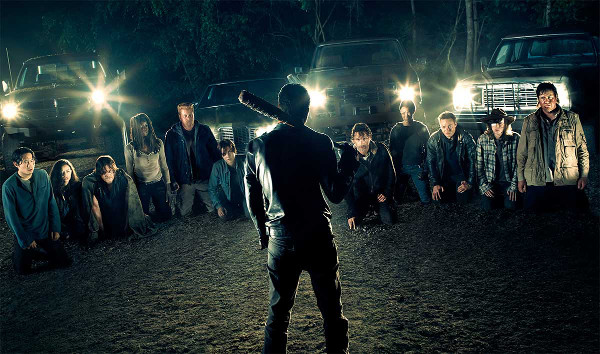 Season six of The Walking Dead ended on the mother of all cliffhangers. In case you’ve forgotten, here’s a recap of the sixth season:

The group is in Alexandria, and Rick has taken charge after the whole ordeal with Pete. There is a large herd not too far outside of Alexandria that they have to take care of. While most of the heavy hitters are out dealing with the herd, Alexandria is attacked by the “Wolves.” Carol and Morgan are Alexandria’s defenders.

Outside of the wall, many of them get separated while dealing with the herd. Daryl, whose been separated from Sasha and Abraham meets Dwight, who claims to be running from a group called the “Saviors.” Sasha, Abraham, and Daryl reunite and find a fuel truck, but they are stopped by some of the Saviors, whom Daryl blows up. Glenn and Nicholas are cornered by a small herd of walkers, and Glenn becomes trapped after Nicholas commits suicide. But Glenn finds his way out and back to Maggie.

Back at Alexandria, the weakened wall falls and allows walkers to enter. In the chaos, thirty Alexandrians are killed, including Deanna and the Anderson family. Carl loses his right eye, and Rick attempts to take on the herd which leads to the surviving members to stand against them and defend Alexandria. This causes Rick to see a future for Alexandria.

Two months later, Alexandria is secure again but supplies are scarce. While on a run, Rick and Daryl meet a guy named Jesus who is from a community called the Hilltop. The Hilltop is being controlled by someone named Negan, who is the leader of the Saviors. Maggie makes a deal to get rid of Negan and the Saviors. They successfully get rid of what they believe to be all the Saviors.

Rick, Carl, Michonne, Glenn, Abraham, Sasha, Daryl, Eugene, Rosita, Maggie, and Aaron have all been taken by Negan and the Saviors. Negan provides them with a hell of an introduction, announcing that he will “beat the holy hell” out of someone in the group with a bat wrapped in barb wire called “Lucille.” The season ends before we know the identity of who Negan kills. And finally, the big night has arrived with the premiere of season seven on October 23rd.

The season seven premiere was jam packed with emotion. Negan has to be the most frightening enemy that Rick and his group has faced. No matter who has stood in their way, Rick always finds a way to fight back. But Negan manages to break the Rick we’ve come to know.

It turns out the person that Negan hits is Sgt. Abraham Ford. And if that wasn’t bad enough, he also kills Glenn Rhee. Negan took two of the group’s strongest men, leaving the rest of them helpless and afraid. Both characters managed to give out last words that are fitting to their personality. Abraham’s last words were, “suck my nuts.” While Glenn’s were, “Maggie, I will find you.”

“I’m gonna kill you…not today, not tomorrow, but I’m gonna kill you,” says Rick to Negan after the deaths. As a result, Negan works to break Rick by driving him out and throwing him to walkers, then by threatening to kill everyone unless he cuts off Carl’s left arm. These events make Rick finally comply.Â  The only one who seems to still have some fight left after this brutal moment is Maggie, who says “We have to fight.” They have all been put through so much, and the losses that Negan caused will sit with them for episodes to come. And now they all belong to Negan. This is going to be a difficult season for these characters.

The Walking Dead airs every Sunday on AMC at 9/8c.