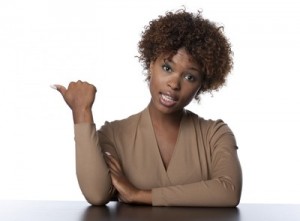 We’ve all seen someone do it, and at some point or another, we’ve all done it ourselves. We make what we consider to be a mistake that’s too obvious to hide. It’s done and it’s out there for the entire world to seeâ€¦.and judge. So what? Â Stuff happens, right?Â  It’s a part of being human. Â We could give ourselves a break, but only if the mistake is with something that our ego hasn’t attached itself to.Â  And because the ego’s job is to keeps us invested in looking good, we have to make up something. We have to tell ourselves something so that we can feel better about our mess.

It isn’t our fault when our relationships don’t work. Â It isn’t possible that our vibrational picker could be off, or that we are too difficult, or too clingy or too dismissive, or tooâ€¦â€¦something.Â  Our relationships don’t work because the men out there just don’t get us, or they are players, or they are too immature, or just not “right” in some way.Â  That project at work didn’t go south because we failed. It happened because “they” sabotaged us or didn’t give us all of the information we needed to get the job done. We didn’t sit back and not participate, contribute our fair share, or carry our part of the load because we were being lazy. No! It was because somebody else made us feel that our contribution didn’t matter, so we figured, “what would be the point in trying?” Â We aren’t an hour late for dinner because we failed to leave home on time. We would NEVER treat our friends so carelessly. We are late because of traffic, and everybody knows how bad LA traffic is. We don’t snap and go off because we are feeling on edge. We are far too nice and way too emotionally grounded for that. Â We snap because we are pushed to the limit by someone else and the object of our wrath deserves exactly what they get from us.

And that’s just what the ego does.Â  It is the ultimate victim, and it is also the ultimate liar.Â  It blames, avoids responsibility, and tells us that we would get along just fine if it weren’t for all the people and stuff out there that keep getting in the way of our good doings.Â  It makes us avoid the truth about who we are being.Â  It makes us avoid facing the challenges that could help us to more fully develop into the people that we want to be. The ego keeps us in bondage and keeps us playing small.