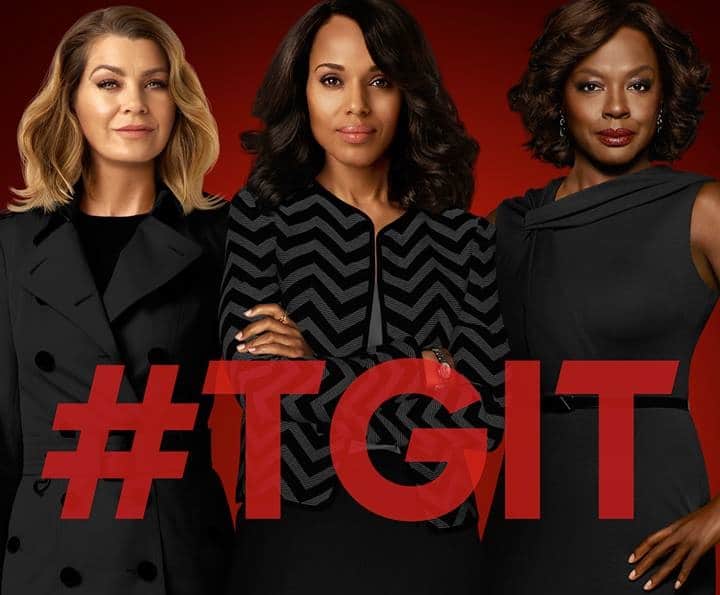 Grey’s Anatomy, Scandal, and How to Get Away With Murder all had their winter finales on November 16th. Let me give you a recap and my take on each.

Before we get into the winter finales, Grey’s Anatomy aired its 300th episode which had a lot of reminders from the first season of Grey’s. There was an accident on a roller coaster ride and two of the patients resembled Cristina Yang and George O’Malley, while their pregnant friend resembled Izzie Stevens. The replica Cristina and George were even brought to the hospital by paramedic Nicole Cummins. Ellis Grey made a cameo when Meredith won the Harper Avery. Show creator Shonda Rhymes even used the original theme song and title sequence. It was full of nostalgia, Grey’s at 301 episodes and counting (including the winter finale).

In the winter finale of Grey’s Anatomy, the hospital system has been hacked, putting all the patients in danger. Monitors, phones, labs and patient files are all down and Bailey is prepared to pay the hackers the 4,932 Bitcoin (aka about 20 million dollars) to regain control of the hospital system. Meanwhile, Meredith cannot get blood in the middle of her surgery and has to use her intern’s blood for a transfusion. Alex sends Jo to figure out what meds to give their patient and as she’s about to get the information to Alex, she is thrown off by the sight of her abusive husband, who smiles at her while saying, “Hey Brooke, oh wait it’s Jo now, right?” And Bailey tries to contact Jackson for the ransom money as he’s in a helicopter with Maggie trying to stop their patient’s bleeding.

So in short, there is another hospital crisis and this one involves the FBI. Bailey is pissed at Ben for his decision to yet again change careers, saying “sounds like a man with commitment issues to me.” There is still that awkward…something going on between Jackson and Maggie, who are technically step-siblings, making it more awkward. And the most shocking and well anticipated moment was the appearance of Jo’s abusive husband, who will surely rattle Grey Sloan Memorial Hospital.

In the winter finale of Scandal, the reckoning of Olivia has come. It is revealed that Papa Pope is the one who took Quinn in order to get his freedom and dinosaur bones from Olivia. If Olivia doesn’t comply, Eli will kill Quinn. On one hand, Olivia’s command and Quinn’s death will solve all her problems and on the other hand, it’s Quinn and she’s pregnant. Olivia goes to her mother, who she’s keeping in secret (sounds familiar?), for advice on Eli. In the end, Olivia refuses to back down and we hear a gunshot followed by Quinn’s pleading and another gunshot. Eli returns to Olivia and says, “Do you want to see the body?”

Does Olivia really think Quinn is dead? I mean, because, hasn’t Papa Pope’s goal been to save Olivia? And let’s face it, these days Jake sounds more like command than Olivia, to be honest. She’s too conflicted to measure up as command, though she’s had her moments. And, is it just me or is it easy to forget that Mellie is the President lately?

The winter finale of How to Get Away With Murder brings the chaos as we find out the events of “that night.” At the Caplan & Gold party, Connor, Michaela, Oliver and Asher enact their plan to take down Laurel’s dad. Of course their plan doesn’t go smoothly and Simon overheard them talking about Tegan’s key card. As they fail to calm Simon down, he grabs Laurels bag and they fear he’ll find the data they just stole but instead he finds Laurel’s gun. He ends up tripping on a chair and shooting himself in the head. Michaela takes control of the situation, sending Laurel away from the crime scene and removing Asher’s prints from the gun after he picks it up. The gun wasn’t placed back properly and causes suspicion which leads to the arrest of Asher. Connor goes to Laurel’s apartment looking for her and is overheard by Dominic. Meanwhile, Laurel goes to Annalise’s hotel after listening to her message. While on the elevator she begins to notice blood on her hand. Then she begins to suffer pain. Confused about what is going on, Laurel remembers she had taken a hit to her stomach when Frank tried to choke Connor and this is what is probably causing her pain and severe bleeding. When she tried to exit the elevator to seek our help, the elevator is stuck. After a few agonizing moments of trying to call for help, she begins to give birth and passes out from blood loss. Annalise was unable to get to Laurel but was able to get to the baby and start CPR. Cries are heard as the scene comes to a close.

This finale left me with more questions than the other two. Simon was shown in the hospital but is most likely dead; but will Asher be held accountable for his death? Will Laurel’s baby survive? Will they end up getting justice for Wes now that Dominic knows something is up? Is Annalise going to let them drag her back into the chaos? And how will this all play into the scene of the aftermath we’ve clung to?

All your questions will be answered with the return of TGIT on January 18th.