Supermodels Speak on Lack of Diversity in the Fashion Industry 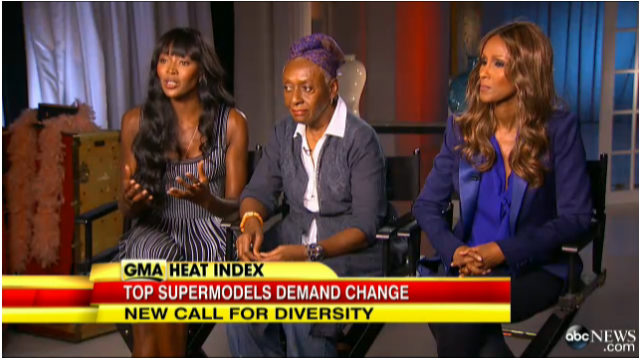 Supermodels Naomi Campbell and Iman have joined forces with former model and advocate Bethann Hardison toÂ join Fashion Diversity Coalition in an effort to bring fourth change in the fashion industry that has an alarming lack of black models on the runways. The iconic models have been very vocal throughout the years on their views and now have taken it a step further by identifying high name designers that have few or no black/ethnic models included in their runway shows and ad campaigns in an open letter to the CFDA (Council of Fashion Designers in America) in an attempt to spark criticism, debate, and hopeful change from these practices which named designers Donna Karen, Calvin Klein, and Armani as the worst offenders. Campbell, 43, and Iman, 58, are two of the most influential models in the industry and two of the most powerful models regardless of race. Both set a precedent in the fashion world while transcending color lines and are now using their high profile statuses to speak against all white casts in runway shows in what is being called a groundbreaking move. Lack of diversity is nothing new in fashion runways but Iman notes that there has been a substantial decline in the hiring of ethnic models throughout the years. She has been quoted as saying that “there are less models of color being hired in 2013 than there was in the 70’s.” In their interview with Good Morning America’s Juju Chang, the models state that though they don’t believe the designers themselves are racist, they do however believe the act of excluding diverse models is in fact racist and should be a discontinued practice. They also claim that they are not in any way trying to shame any designer into being accepting to diversity by exposing the names, but instead want to shine a light on and bring accountability to an issue that has been long overlooked. Â In 2009 in an interview with DailyMail at her Fashion for Relief Charity Runway Show, Campbell spoke on the regressive ideology of the fashion industry as it pertained to displaying ethnic beauty in conjunction with the runway looks that are already prevalent. â€˜There’s definitely space for more black models but has there been enough effort? It was getting better but it’s slipped back this year.’ says Campbell, while adding â€˜Women of color who have had a great experience in life need to share their experiences with others. The world is not made up of blonde hair and blue eyes. We need to share ourselves.’ This sentiment was echoed this year when the ladies spoke to GMA about the excuse of “creative vision and aesthetic trends” as to why they only use white models in their shows which model and advocate Bethann Hardison considers to be “a sense of laziness.”

22 year old British supermodel Jourdan Dunn who in her young career has also made major strides in the fashion industry modeling for Burberry, Prada, Yves Saint Laurent, and was selected to grace the cover for the Black Model Issue of Vogue Italia as well as being named British model of the Year in 2008 has also spoken out on the scarcity of black models in an interview with Net-A-Porter in April discussing being turned away because “the client didn’t want any more black models.” This is a sentiment shared by model Chanel Iman who spoke with Sunday Times Magazine stating: “Yeah, most definitely. A few times I got excused by designers who told me ‘we already found one black girl. We don’t need you anymore.’ I felt very discouraged. When someone tells you, ‘we don’t want you because we already have one of your kind, it’s really sad.” According to Styleminutes.com “Nearly 90% of the models cast to walk in the fall 2013 runway shows in New York, London, Milan, and Paris were white.” Prada has now hired their first black model to feature in an ad campaign (the Prada Fall/Winter 2013) in 19 years! Â Yes, almost two decades. Fashion industry newcomer, 19 year old Kenyan model of the UK Malaika Firth will be the first black model to do so for Prada since 1994’s Naomi Campbell. These open conversations on the lack of representation of varied beauty are completely necessary when staggering figures like these are presented. Here’s hoping for progressive change in the fashion industry in the near future as more and more are becoming increasing fed up with the status quo. Watch the Supermodels speak on their initiative below!