The children of SEBNC(Southeast Bronx Neighborhood Centers)/SONYC(School’s Out NYC) Â Mckinley Afterschool Program have a strong message to share with their community about anti-gun violence. The very talented, singer-songwriter, Josh Xantus came to the Bronx facility to meet the kids and give them his take on what they are doing. Xantus was pleased to hear about the kids literally stepping up to make a difference in their community. “Academics are everything,” said Xantus.Â  He stressed Â to them that if they get good grades their parents would be willing to listen to anything they had to say. “I couldn’t go to my mother with a D in class wanting her to listen to something I had to tell her; I had to do better than that,” he explained.

Xantus spoke to the kids about how important it is to have passion for the things they want in life. “You have to be passionate when it comes to following your dreams,” he said. This is very true. When it comes to something you want in life, your passion will help you reach your goal. That is exactly what the kids of SEBNC have, Â Â along with a dedication to stop gun violence.

Josh shared his words of wisdom with the kids. “It’s good to be a leader,” he told them. You have to go against the pack sometimes in order to get where you need to go in life. “Some of my friends told me I was dreaming when I told them I would make it big,” explained Josh. He knew he had what it took to get there and he certainly did. Josh explained, “Being an artist, using your voice is the key when it comes to speaking to today’s youth. The entertainment industry should use their voice to speak to the youth when it comes to violence, especially gun violence.” That’s exactly what these kids did on April 21st.

Xantus has a goal in life Â which he wants to accomplish; he wants to build a school to show the youth how important the arts are in life. Â Through the use of music, dance, step, and other art forms, children can express themselves in a positive way. “In order to get through to others you have to strive. You have to be willing to fight for what you want,” Xantus stated. He told the kids they have to “uplift each other and never give up.” It’s good for our youth to hear from those in the industry because it does make a difference. The difference of hearing from someone who has been where you are and had a positive outcome in life is a great thing to inspire our youth.

Xantus had so many positive things to say to the kids of SEBNC, especially since he is someone in the business. As he spoke to them [kids] on their radio station, which they produce and engineerÂ  (airs every Wednesday from 5-6pm on www.sebnc.org), you could see that they reflected upon his words, especially when he told them to follow their dreams and to be passionate about their craft or idea. He showed them that anything is possible as long as you strive for it. It is also possible as long as you put in the effort. It is a good to see the youth trying to make a difference in their community. Anything is possible as long as you put your mind to it.

This is exactly what they did. On Thursday, April 21, 2016, the children of SEBNC/SONYC McKinley Afterschool Program had their 1st Town Hall Meeting. The caption was “Enough is Enough.”Â  They invited their entire community to come join them while they spoke on gun violence. Lately, gun violence is something that has been taking over many communities.” Today’s youth know more about gun violence because they are seeing it every day in their community,” said Krystal Monroe, one of the parents. 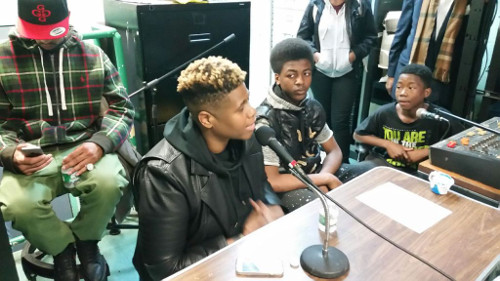 On average 31 people are killed by a gun every day; 7 of those 31 are teens and children; 151 people are treated in the emergency room every day for a wound that was inflicted by a gun. The ages range from infant to 19 years of age. “These days people don’t use their fists or words, they rather shoot over something so stupid,” said Shauneice Robinson. The children of SEBNC raised awareness to make a difference. Although about 90% of the children that attend the program have lost either a friend or family member to gun violence, there hasn’t been a shot in their neighborhood for over 252 days.

“One night I was sleeping and I woke up to a bullet hole in my window and wall, I was happy that I was asleep because if I was standing up that bullet could’ve been in me,” says Jalen, one of the youth panelists for the Town Hall Meeting, as well as a Â participant of the program. It isn’t easy trying to convince people to see things the way you do. For children to be able to bring a community together to raise awareness about gun violence is something serious and trailblazing.

Nadia Vasquez, another youth panelist, told her story with gun violence from a childhood incident. “I remember being outside with my best friend and we were just playing, not paying attention to anything,” says Vasquez. “As a child we don’t have a care in the world. We don’t have any worries. We were running in the park and they just started shooting, I was able to run but my friend wasn’t so lucky,” said Vasquez through tears.

Gun violence is a serious issue that many people have to face every day. Imagine going outside and having to look over your shoulder wondering if you are going to make it back home that day. Today’s youth have to face that problem every day no matter where they live. People fail to realize that the things the youth see and hear on television make a difference. One of the questions on the panel was about the effects of mass media portraying gun violence and its effects on teens.

The Town Hall Meeting was also a live web stream where the children of SEBNC got to talk with other youths from L.A., Atlanta, Dallas, Houston, and NYC. They got to hear their perspectives on things that were going on in their neighborhoods as well. The children were explaining to each other what they go through on a daily basis. They see deaths all around them and have lost friends and family members to gun violence. Some of the children even went as far as to explain that it has become an ordinary thing, and that some of their family members were convicted for inflicting gun violence on another person.

It takes a lot to make a difference in the community. It takes a village as well. Josh Xantus became part of that village; and the children of SEBNC intend to continue to expand their village to more cities to include more youth to help stop gun violence. If you want to watch the live broadcast of the Town Hall Meeting go to https://www.youtube.com/watch?v=IQMB2Tg6qfw