#Summer2K17: 5 Takeaways from the Fifth Season of Orange Is The New Black 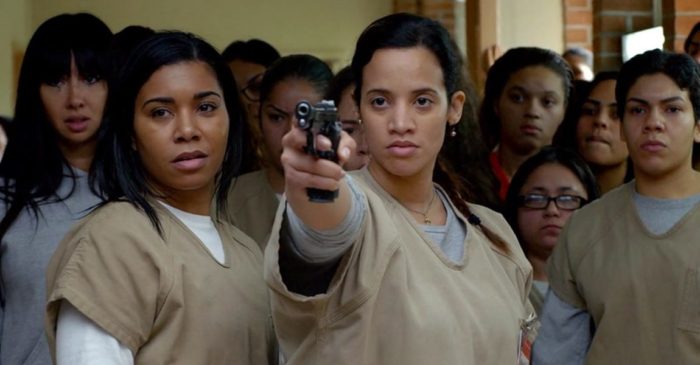 Another season of Orange Is The New Black finally made its way to Netflix on June 9, and fans were excited to see the aftermath of Season 4’s daring cliffhanger. The fifth season of the Netflix juggernaut began with Dayanara Diaz contemplating her next move with her gun pointed at CO Humphrey. Her decision ultimately led to the show’s wildest storyline yet: a prison riot. Although promising, the season began to drag and quickly became underwhelming until the last three episodes. However, as always, there are bright spots in any dismal situation. Here at Bronze Mag, we’ve decided to focus on the positive, and discuss a few of the takeaways we got from the latest season. Let’s get started:

*DISCLAIMER: The next portions of this piece contain spoilers of the fifth season of Orange Is The New Black. Those who have not seen the new season, or the show, are not advised to read the following portions until they have done so.*Â

While everyone was either focused on justice, revenge, or other shenanigans, Pennsatucky’s eyes were set on something else: love. This season found her stuck in love with CO Coates, the same man who raped her back in Season 3. While Pennsatucky’s best friend Boo resents their relationship, Pennsatucky presses forth in her quest for romance, even to go as far as helping Coates escape unscathed from the prison riot. One of the last scenes of the final episode finds Pennsatucky and Coates curled up on a couch together watching TV, as if they’re a normal couple. In reality though, they’re far from it. Even when the one person who has always had her back, Boo, objects their relationship, Pennsatucky chases the man who has violated her all because she wants to feel love and be loved, even if that love is unhealthy. If there’s one thing we learned from this, it’s that you can lead a horse to water, but you can’t make it drink.

#2 The Challenge of Intersectionality

This season held up the mirror to the challenges of intersectionality in the fight against modern day injustices. When the prison riot broke out, everyone had their individual causes and motivations that led to a multitude of individual actions. Quickly the ladies realized that there was strength in not only numbers, but unity, and began to band together when they created their list of demands. However, the ladies of Litchfield became even more scattered than ever as the season progressed. When patience gave way to desperation, individuality trumped the greater good. We saw this with Taystee, as she was so focused on fighting for Poussey’s justice, that she threw away all of the other demands that the other ladies had voted on episodes prior. We also saw this with Maria, as she freed the hostages in order to take time off of her sentence. We even saw this with the usually level-headed Gloria, who tried to free the hostages in order to see her ICU-ridden son, but was beaten to the punch by Maria. All in all, it was easy to see that in order for change to be achieved, everyone involved must be focused on the greater good of everyone else’s concerns in addition to their own. Intersectionality requires patience and belief, which is two things that the inmates did not possess during the riot.

#3 Inequalities in the School System

Season 5 spoiled us with a couple of flashbacks from Janae’s teenage years. As we already know Janae was a very bright girl, and one of her teachers took notice of her potential. In an effort to get her interested in a better, private school, the teacher arranged for Janae to shadow a student at the private for the day. Janae, coming from an underfunded and under resourced school, was amazed by the many activities and opportunities that the school offered. But as the tour ran on, she began to feel resentment towards the predominantly white private school students, as they have chances that Janae and her fellow African-American students don’t have. This is most certainly a critique of the today’s school system, as many minority-majority schools don’t have the same access to opportunities as Caucasian-majority schools do. What Janae felt is what many kids feel, and then some. Lack of support is the quickest way to kill someone’s dream, and the quickest way to kill someone is to kill their dream.

Â #4 Say What You Mean, Mean What You Say

Thankfully, Alex and Piper became a likeable couple this season. (This may have been because of the diminishing of their characters, but that’s neither here, nor there, and welcomed nonetheless.) Alex, fed up with Piper’s lack of ability to stay out of trouble and drama, basically told Piper to get lost at one point in the season. During one of Alex’s sulking moods, Yoga Jones made a profound statement, saying “You can’t tell someone to leave, then be upset when they left.” Oftentimes we say things we don’t mean to the people that we love. In an effort to communicate effectively and properly with your significant other, it’s important to say what you mean and mean what you say.

#5 This Is Our Story to Tell

One of the best parts of Season 5 is Taystee’s character development as she tackles the task of honoring the death of Poussey just days after her death. Taystee faced many obstacles in her efforts for justice, and at one point she thought she found it in Judy King. During the riot, the media was fearful that Judy King was being held as a hostage. With that type of media coverage, Taystee was convinced that Judy King could bring the much needed publicity to Poussey’s death. Thanks to a reminder from Janae, Taystee decided to go against the idea, and instead of Judy King speaking on their behalf, Taystee decided to speak from her heart about the many injustices in the Litchfield prison. This is easily an encouragement for marginalized groups of people to speak and let their voices be heard about the various injustices they may face in modern society. Whether it’s the Black Lives Matter Movement, unfair wages, or sexism in the workplace, one should never be afraid to speak up and out for what they believe in. Their story is their story, and they’re the only ones that should tell it.

What about you? How do you like the new season of OITNB? Any takeaways? Let us know in the comment section below, and don’t forget that you can connect with Nathan on Twitter @TheGreatIsNate.