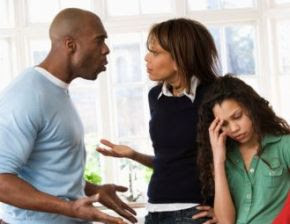 The day my daughter called me a “good mom” and her â€˜HERO’, I hadn’t done anything that spectacular. No leaping buildings in a single bound or any other such feats. There was a beetle in our house and it was crawling on the floor between us. Now, anyone that knows me knows that I am (almost) deathly afraid of bugs. Yes even my three year old knows this. Still, when the bug started crawling toward her and she squealed, I leapt across the room, snatching her up off of the floor. Inadvertently, I squashed the bug. Just like that, I became a hero.
This may not mean much to most but it made me realize something; my daughter recognized that I acted to protect her in spite of my fear and that as a â€˜good mom’, it was my job to do so.
I believe that all good parents want this more than anything- to protect their children from the things that might scare or hurt them. Why then do so many single parents fail to realize how detrimental it is the psyche of a child to hear them tear down the parent that is absent from the home?
I know that this certainly goes both ways but as a single mother who often supports and communicates with other single mothers, I hear the most derogatory remarks about the father of the child(ren). I’ve also heard it from remarried women about their exes. Sure, confide in me your troubles, struggles and issues. Call your sister, best friend, even your ex-mother-in-law (some of these women out here know that their sons are deadbeats) but don’t dump the garbage on your child.
If someone was standing in front of your child hurling accusations, curse words, and other expressions of hatred at your kid, you’d be the first to step in and shut it down. Well, even if the child has never laid eyes on their father, it doesn’t matter. Kids are so very perceptive. They know that they have a father and that he is a part of them. In essence, you are the offending party when you denigrate his/her father in front of them.
Of course I am not suggesting that you lie to your child regarding the negative actions, statements, or the absence of the parent in question. Just be mindful of any anger or ill feelings that you have when you speak to your child. Take a few minutes to think about your words if a recent situation has made you bitter or angry. I’d be the last person to tell anyone that they don’t have a right to feel what they feel. I always suggest that people give their feelings the analysis and the validity that they deserve. Still, in all truth, that person was your choice- not the child’s. And I say again, children are very perceptive. Whatever the absent parent’s shortcomings are, kids tend to figure them out for themselves after too long. When they do, they will need your patience and love for them to help them work through any issues they have because of them. They won’t need your resentment to compound any negative feelings that they may already have.
Your innate instincts are to protect your child, even from the little things. Bugs, sunburn, bullies, heartbreak, disappointment- you would wage war on them all even in the face of your own fears. Don’t let a relationship gone bad, late child support, and absenteeism or yet, your own issues and insecurities make you out to be a villain. Be the hero that your child knows you are and will always need you to be.