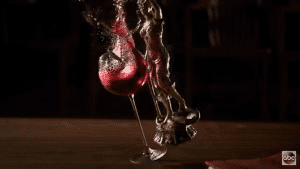 Last week on Thursday, March 1st, after a brand new episode of Grey’s Anatomy, two of the TGIT worlds collided with a Scandal and How to Get Away With Murder crossover event. Kerry Washington and Viola Davis together for a two hour show? Before the announcement of this crossover event, fans were unaware that two of TGITs powerful women were operating in the same universe. At the end of How to Get Away with Murder’s “Ask Him About Stella,” Michaela convinces Annalise to get the class-action lawsuit heard by the Supreme Court, “That’s why you need to know people. People with power, people that have influence, fix problems! I know who that is!” The final scene shows that after resigning from the White House, Olivia is lecturing a class, which Annalise is attending, in how to survive a scandal.

This is where the crossover event begins. After the class, Annalise introduces herself to Olivia and asks for her help with fast tracking her class-action lawsuit to the Supreme Court, urging Pope to read the case file before making her decision. Olivia agrees that it is a good case but not for Annalise, based on a Google search of Annalise’s past. Annalise is able to change Olivia’s mind by saying,“I thought you were able to move mountains. That’s why I came here looking for you. Your reputation was supposed to speak for itself.” Olivia agrees to work with Annalise but not without letting her know who’s boss, “If we’re gonna work together, then there’s one thing you need to understand. This is my town, my game, my rules. Understood?” Olivia then enlists the help of Fitz and the White House.

However, it is clear that the characters of Scandal (i.e: Mellie, Quinn, and Jake) are still holding a grudge against Olivia. This affects Annalise’s case, which causes problems between Olivia and Annalise. Of course, these two strong personalities would clash as they try to work together. The conflict between these women brings the plots of both shows together as it focuses on the main theme of Olivia’s fall from grace and Annalise’s determination to see the lawsuit through. 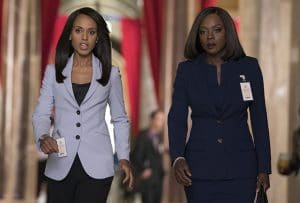 Annalise effectively calls Olivia out for her behavior throughout the episode. “â€”Because I thought you had a bite behind that bark. But instead I found a siddity phony who judge me from the minute she laid eyes on me. â€”You think we soul sisters just â€˜cause you rented out a hair salon for a few hours on the black side of town? Please. I’ve dealt with plenty of bougie-ass black women just like you. Spent most of your life in boarding school, Ivy League Universities, with a horse between your legs and a silver spoon in your mouth. â€”But it sounds to me that despite all of your failed attempts to stand above me on your little pedestal, we’re the same. So keep it real, Olivia Pope.”

Quinn realizes that the class-action is bigger than her problems with Olivia and helps her get the case back on track. Scandal ends with Annalise and Olivia agreeing to see the case through together.

How to Get Away with Murder begins with Olivia and Annalise preparing to make their case to the Supreme Court. The drama from “Ask Him About Stella” resurfaces and Olivia doesn’t hesitate to put in her two cents. “And I don’t understand how inviting distraction into your life the day before the biggest case of your career is a good idea.” But this is How to Get Away with Murder territory, where distractions are always happening and Annalise lets Olivia know it too. “I let you do your thing, but this is my world, my rules. So stop worrying about me being preparedâ€” Stop handling me and let me do my job the best way I know how.” 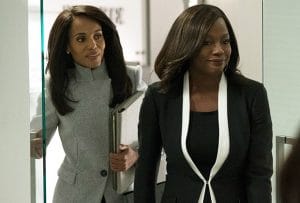 At the worst possible time, Annalise finds out about Isaac’s overdose which sends her down the path of doubting herself. She begins to worry about failing and wants to turn to a bottle of vodka. But not on Olivia Pope’s watch. “Stop thinking about those people. You said it yourself. You’re not doing this for themâ€”for Nate, his father, your mother, me. You’re doing this for you. And for that little girl who clawed her way out of Memphis after always being told she wasn’t good enough. â€”Whatever you think is in this bottle is already in you. I know that, but I don’t have time to convince you of that. So if you think you need to drink, drink. And the speech works, because Annalise picks herself up off the floor and makes her way into the courtroom.

Annalise kills it in the courtroom by throwing the words of the conservative Justice Strickland back at him. Words that he had written in his 1985 ruling of the case Bryant v. Topeka. It is clear that her rebuttal speech moves not only the Supreme Court but the entire courtroom. We aren’t told whether she won or not but it definitely feels like a win for Keating and Pope. But it’s not a proper How to Get Away with Murder episode without a major cliffhanger. Bonnie calls Annalise from the hospital. It has to be about Isaac, right? But of course not, the episode ends with Bonnie saying Simon is awake.

This crossover event was not only entertaining but it does a great job of pushing the plots of both shows forward through the dialogue between the mix of characters. Olivia is still struggling with the aftermath of leaving the White House as well as losing herself and everyone she cares about. While Annalise struggles to protect those she cares about from previous events.

New episodes of Scandal and How to Get Away with Murder air tonight at 9/8c and 10/9c following Grey’s Anatomy.