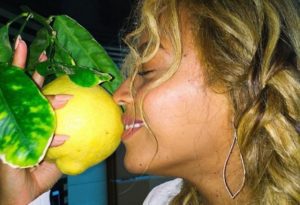 Through and through, Beyonce’s latest visual album, “Lemonade,” is a celebration of black women. The film acts as a visual embodiment of the trending hash tag, #blackgirlmagic. With the recent emphasis on black women in social media this year, the album dropped in an appropriately timely fashion; as it seems like the cherry on top of a glorious year for black women. While several critics have interpreted the album as a representation, or even confession, of “marital strife” between the artist and her husband, the visual and spoken word elements tell a different story, one of the hardships of the black woman living in the United States.

The opening visual of the lead artist sitting in a prayer-like position, center stage in front of the classic red curtain, dressed in a layered black outfit, garnished with a black head wrap, sets the humbling, candid tone of the film. Soon after, we see BeyoncÃ©’s bare face as she utters the lyrics to “Pray You Catch Me.” The decision to depict the artist in her most sincere state as she “pray(s) to catch [him] whispering,” immediately establishes an honest and real portrayal of the former “superwoman.” As the rest of the film maintains an underlying story of the hardships experienced by the black woman, this depiction was necessary; as it transitioned her from the realm of a superstar to that of a humble black woman. The film depends on the depiction of BeyoncÃ© as a real woman to whom other women can relate. This portrayal coincides with the persistent narrative of the black woman. 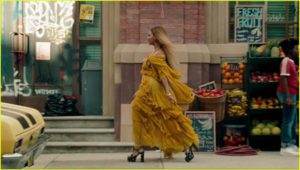 The film plays on some interesting stereotypes of the black women; one of which is very evident in the “Hold Up” music video. The irony of BeyoncÃ© dressed in a beautiful yellow Bohemian style dress, with long almost kinky blonde hair, while she smashes in car windows with a bat, plays on the stereotype of the “angry black woman.” The lyrics to the catchy song suggest that her rage stems from her husband’s infidelity; which in itself offers an interesting truth: while black women often carry the weight of racism on their shoulders for the men in their communities, it is often those same men who we aim to protect that often drive us near insanity when they fail to appreciate us. Nonetheless, BeyoncÃ©’s beauty in this scene, despite her “jealous and crazy” behavior, further captures the essence of black girl magic. Although stereotypes maintain a negative connotation, the pop icon’s ability to carelessly destroy expensive merchandise while “slaying” adds a positive spin to the idea of the angry black woman. In fact, Beyonce’s decision to own her insanity strips the power from that stereotype of the black woman. The lyrics enforce this effect as the state that she would rather be crazy than “walked all over lately.” 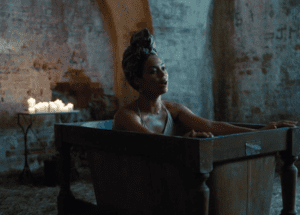 Returning to this narrative of the real black women, the spoken word piece, “Anger,” eerily addresses the idea of the black women donning whiteness in order to appease societal preferences. Subtly, BeyoncÃ© recites that “If it’s what [he] really wants”, she can “wear her skin over mineâ€¦her hair over mineâ€¦her scalp as a cap.” The poem necessarily addresses an extremely heavy topic, which is that: historically black women have donned on the features of white women in an attempt to beautify themselves. Earlier in the film, when the artist is submerged in water, the voice over states “I bathed myself in bleach.” From early on, we are introduced to this controversial discovery. As there have been several allegations that BeyoncÃ© had been bleaching her skin, this line acts as a sort of confessional. Whether or not BeyoncÃ© actually bleached her skin is quite irrelevant in the context of the larger message. Part of the narrative of the black women living in the United States is the feeling of being unwanted, unattractive, and unappreciated, especially compared to the white woman. BeyoncÃ© hits the nail on the head with her decision to address this undeniable truth of existing as a black woman in a white supremacy. The spoken word addresses wearing a weave and skin bleaching, all elements of black womanhood that embody the historic need to run from blackness. The film then transitions to a scene of several black women in their tribal paint with African hairstyles, swaying back and forth on a bus. This imagery immediately invokes a memory of our past ancestors stacked next to and on top of each other as they voyaged from Africa to the Americas. And yet, despite this ode to the past of enslavement, 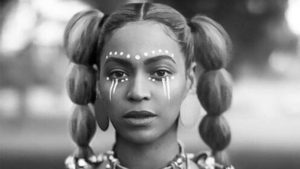 BeyoncÃ© manages to reclaim and reestablish the power of the real black women with the video for her “Sorry” song. Featuring Serena Williams and other black queens, the song and video establish a feminist tone as the lyrics talk about comradeship between her “RODees” (ride or dies), and her indifference towards her unfaithful husband. To feature another black woman at the top of her field in a playful and sexy light adds to Beyonce’s relatablity and embodiment of the theme #blackgirlmagic. To see two powerful black women dismiss hardship and be able to say “I ain’t sorry,” is a huge display of composure and strength that is relatable, empowering, and inspiring. The “Sorry” video and song truly echo the strength that black women have mustered up through years of societal neglect and ridicule. 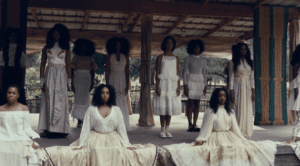 Lastly, BeyoncÃ© explores the magic and hopeful nature of offspring and reproduction. The scene entitled “Hope,” initiates Â discussion of the passing down of traditions from one generation to another. BeyoncÃ© recites:“The nail technician pushes my cuticles backâ€¦she stretches the skin and my palm and says, â€˜I can see your daughters and their daughters.’” While the spoken word alludes to the magic of reproduction in general, the piece focuses more on the reproduction of a daughter as it plays a huge role in the magic of black womanhood. The piece emphasizes the power of women to not only create whole black communities, but to also produce other black women who are joined together by the same experiences and hardships. The image of afro-centric women from all ages partaking in fellowship, as BeyoncÃ© musically declares her new found “freedom” perfectly, reflects this theme of unity and wholeness within the community of African American women. The following depictions of the same renowned and powerful women standing candidly in historic fashion as they penetratingly gaze towards the camera, relay a message of power attached to black womanhood.

Overall, BeyoncÃ©’s “Lemonade” album is a thought provoking, visually striking, and powerfully produced piece of art that challenges stereotypes and redefines the meaning of black womanhood. With the combination of brilliant cinematography, poignant spoken word, and a well arranged musical sound score, the visual album is undoubtedly BeyoncÃ©’s best work.