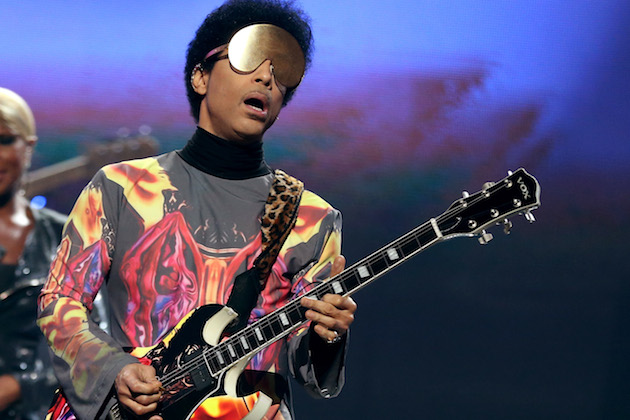 Legendary, flamboyant singer-songwriter and musician Prince (full name Prince Rogers Nelson) recently surprised long-time fans by releasing a brand new track. The single is called “What If,” and it’s a cover of Christian singer-songwriter Nichole Nordeman’s track of the same title. The edgy tune is Prince’s first new song since he released solo album Art of Official Age and his inaugural album with new group 3RDEYEGIRL, Plectrumelectrum in 2014. 3rdEyeGirl drummer Hannah Welton sings on the song alongside Prince. He introduced the new track at local Louisville radio station WFPK. Prince and 3RDEYEGIRL also recently unveiled a new 1970s retro-style video for their song “MARZ” (from Plectrumelectrum).

After performing a series of surprise concerts with 3RDEYEGIRL last year in Europe, Prince is now extending his â€˜Hit and Run’ tour to the United States. Last weekend, Prince kicked off the U.S. leg of the tour with four sold-out shows in Louisville, Kentucky. One of the venues was at the Louisville Palace Theater. He even went as far as to giving a cut of the show’s proceeds to local charities. The â€˜Hit & Run’ tour sees Prince and the new group performing various spontaneous shows across the country. Aside from the Louisville gigs, no other tour dates have been formally announced. Given the unusual nature of the tour, expect announcements to come at a moment’s notice. Die-hard fans should pay close attention to any Prince-related outlets if they hope to catch a show in the near future. Prince is dead set on keeping things on the down low and incorporating the element of surprise throughout his tour and release of new music. Last year’s series of shows were announced last minute via Twitter, but Prince has since deleted and removed all of his social media accounts.

A musical prodigy, Prince wrote his first song at the tender age of seven years old. Everything that Prince does is amazing, but he is best known for the music that he composed during the 1980s (including: “Purple Rain,” “When Doves Cry,” “Kiss,” “1999,” “Little Red Corvette,” “Let’s Go Crazy,” “Darling Nikki,” and many other classic tunes) Prince has a wide vocal range and is also known for his outrageous stage presence and costumes. With an illustrious career that spans almost 40 years, he has sold over 100 million records worldwide, making him one of the best-selling artists of all time. As far as awards, he has won seven Grammy Awards, a Golden Globe, and an Academy Award. He was inducted into the Rock and Roll Hall of Fame back in 2004, the first year he was eligible for the coveted honor. Rolling Stone ranked Prince Number 27 on its list of 100 Greatest Artists of All Time. Prince single-handedly pioneered the “Minneapolis sound,” a hybrid mixture of Funk, Rock, Pop, R&B and New Wave that has influenced many other musicians over the years. Kicking off 2015, Prince surprised everyone as a presenter at the Grammys on February 8th. He also performed on Saturday Night Live last November. From the looks of it, Prince, 56, has no intentions of slowing down anytime soon!
Listen to Prince’s awesome new track here: http://yourlisten.com/SIGNE/prince-3eyegirl-what-if
Here is another link for Prince’s new group: http://plectrumelectrum.3rdeyegirl.com/