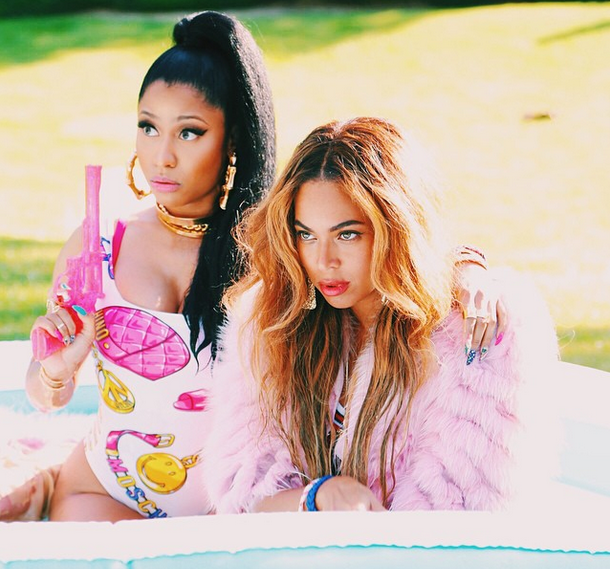 Nicki Minaj and BeyoncÃ© Knowles-Carter finally dropped the music video for their girl-power anthem, “Feeling Myself” through Jay Z’s new Tidal streaming service on Monday, May 18. Serving up a major dose of sass and attitude, Minaj and BeyoncÃ© do not disappoint! The smash single (produced by Hit-Boy), which dropped last year, was performed during Jay Z and BeyoncÃ©’s highly successful “On The Run” tour. “Feeling Myself” is off of Minaj’s third studio release, “The Pinkprint,” which is out now. In the video, the dynamic duo is seen goofing around at a house party in barely-there outfits, cruising around the desert in a convertible, partying at Coachella, twerking and tanning together and chowing down on fast-food. People argued about whether the song was going to be as good as their previous collaboration (the “Flawless” remix on BeyoncÃ©’s self-titled fifth studio album), but I would say that it more than lived up to the hype! Minaj, 32, has long been vocal about her deep admiration for BeyoncÃ©, 33, and clearly had a ball with the R&B songstress while filming the video. Minaj stated in an interview last fall that BeyoncÃ© “represents everything that I would like to be, in terms of being an artist and a businesswoman at the same time.” “Feeling Myself” was anonymously loaded on to Vid.me and has been viewed almost 180,000 times, with nearly 5,000 people watching the Coachella-themed clip as of midday Tuesday. It is now the number one featured video on the Vid.me homepage. The video has also made its way to Tumblr, with the post from a single user having been shared over 7,000 times. If you’re a BeyoncÃ© and/or Nicki Minaj fan, I suggest you check out the new video ASAP!

Here is a teaser of the music video: https://vid.me/GPbV