Movie Review: ‘Get Out’ 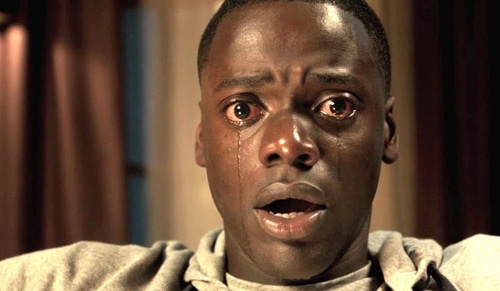 Jordan Peele, most known for co-producing and starring on Key & Peele on Comedy Central, has brought a satirical horror movie to theaters and it’s quite major! The new film, Get Out, highlights and lifts the facade of post racial America and most of the unpleasant truths that go untold. It tells the story of a photographer named Chris (played by Daniel Kaluuya) who is African American, and his European girlfriend, Rose (Allison Williams) who go to meet her parents in the suburbs for a weekend. Rose stresses that her parents are not going to care about Chris’ race, but things soon get a little suspicious to the point where the viewer starts to be a witness to everything he is experiencing. Peele was able to capture the ugliness of institutional racism with combining dark satire and horror into one epic film. Chris grows to be uncertain about the rest of his stay at the family’s house; he feels that his presence is not welcomed, or truthfully, that it never was. Along with the uneasy feeling of being the only â€˜normal’ African American in the house, he senses that the other people who look like him are not quite up-to-par with the strange actions of his girlfriend’s family. The shady groundskeeper and maid have seemed to lose touch with the issues that Chris is currently facing.

Although the producer is seen to be a comedian in the majority of his television debuts, he wanted to make a statement with highlighting the importance of how race plays a role in everyday life. This movie has been at the top of the box office since its release date on February 24th. Get Out is definitely a must see movie with moments that will cause somewhat of a scare, but right after will have the viewer laughing — and then — be frightened again. Peele’s directorial debut is one that shows how this picture might have been in the works for quite some time. Throughout the duration of the movie, you will grow to love Chris’ character and everything that he endures. His continuous fight for freedom is pretty outrageous! It’s a perfect segway into how America is seen today with spooky components that will have you at the edge of your seat. A lot of great points are shown through the cast, which unfortunately embody the meaning of racism and brainwashing people like Chris’ character. It is fairly scary to think that people like Rose’s family exist, but this should be a call for social change, especially on college campuses like ours. So, bring a friend and go see Get Out this weekend!