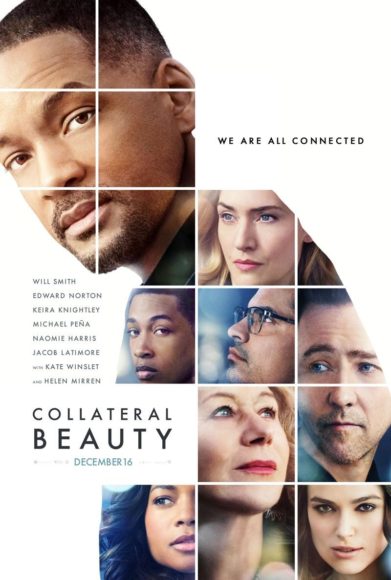 **Spoiler Alert** This review contains revelations about the movie’s plot.

Collateral Beauty, a 2016 film about life and loss, has made history. With less than a week and a half left to this year, and while competing against promising entries like Sausage Party and War Dogs, Collateral Beauty has managed to snatch the title of â€˜Worst Movie of 2016.’ The cast was stacked with quote-unquote serious actors such as Keira Knightley, Edward Norton, and Helen Mirren. The film was released during the holiday season, a time of sappy-ness, overflowing emotion, and a loose grip on wallets. And the film was helmed by one of the biggest international actors, certainly biggest international black actors, of the past two decades. Yet, Collateral Beauty’s opening weekend only managed to garner half of what it spent to produce the film and currently sits at 14% on the Internet’s favorite review site, RottenTomatoes. Many people are using this failure to call curtains on Will Smith’s career as an A-list actor. In reality, Collateral Beauty’s lack of success is due to many things: a trailer that does no favors, a heavy handed gang up, the desire to win an Oscar, and the power of word-of-mouth.

The film stars Will Smith as Howard, co-owner of an advertising agency, who lost his only daughter two years ago to a rare disease. This loss sends Howard into a downward spiral. He shuts down, refusing to communicate with his co-workers, and spends his work hours creating elaborate structures out of dominos. This takes a toll on three particular co-workers: Claire (played by Kate Winslet), Simon (played by Michael PeÃ±a), and Whit (played by Edward Norton). You see, Howard’s lack of communication is jeopardizing the company. His refusal to meet with his clients means that the company is bound to lose those clients. When a huge client expresses dissatisfaction with Howard’s company, Whit concocts a plan. The idea is to save the business by selling the client to a rival agency. However, this can only happen with Howard’s approval. After a conversation with his mother, Whit decides that instead of continuing to reason with Howard, they will accept his reality and use it against him.

Â In addition to an unhealthy obsession with dominos, Howard is also obsessed with what he calls, “the three abstractions:” Love, Time, and Death. These abstractions make up the rhyme and reason behind every choice, decision, and twist of fate. He writes letters to the those abstractions, blaming them for his misfortune. Whit is inspired after coincidentally discovering an acting troupe to trick Howard into thinking that those abstractions have finally come to answer his calls.

For most critics, Collateral Beauty’s major issue begins here. Whit, Claire, and Simon are friends and co-workers of Howard’s. In order to save their company, they decide to convince Howard (and their lawyers) that he’s unfit to run it. This is a devious plan, uncharacteristic of a group of friends. However, those three have compelling reasons for feeling backed against a wall. Collateral Beauty’s main blunder was marketing that made it look more inspirational than it actually was. A man being visited by physical embodiments of Love, Time, and Death is an entirely different film than a man being tricked into thinking he was visited by Love, Time, and Death. However, what most reviews of Collateral Beauty fail to reveal is that the movie twists its twist in the end. Whit, Simon, and Claire, think that they’re playing Howard, but in reality they’re playing themselves as well.

Truthfully, Collateral Beauty doesn’t deserve the title of “Worst Movie of 2016.” Certainly not more than the movie about a Latina taco and a Native American bottle of alcohol. In between the melancholy shots of Howard riding his bike to and fro or staring at a wall, Collateral Beauty is a sneaky Hallmark movie with quadruple the budget. It’s a little bit funny, a little bit touching, but mostly cheesy in its delivery. Helen Mirren, playing Brigitte and Death, steals the show. She’s pushy, self-centered, obsessed with the art of acting, and hilarious. Jacob Latimore, playing Raffi and Time, had two of the three lines in the movie that made me laugh out loud. Edward Norton and Keira Knightley had a romantic comedy-esque back-and-forth that registers high on the cheese-o-meter, but once you look at this movie as a cheesy holiday film, it makes sense.Â  And I have to admit, I teared up a couple of times as well. Collateral Beauty absolutely doesn’t do anything spectacular with its premise or execution. But I’d be lying if I said that I didn’t enjoy it. Anyone who honestly enjoys watching Lifetime movies, Hallmark movies, or Freeform’s Christmas specials will find a kin in Collateral Beauty.

However, Collateral Beauty’s particularly vicious reviews are the consequence of Will Smith’s image shift in Hollywood. Last year, he starred in the (also poorly received) Concussion, a film about a doctor who discovers a dark secret about the NFL. With that movie, Smith’s desire to win accolades (specifically an Oscar) became widely known. Media lambasted him and his wife, who boycotted the award show for lack of diversity and inclusivity, for their obvious eagerness. Smith hasn’t been able to catch a break since. His projects are now described as Oscar bait, films created for the sole purpose of winning awards and praise from Hollywood. Oscar bait is a tricky and potentially damaging descriptor for movies. Audiences don’t take kindly to films or actors who obviously want praise, unless the actor is Leonardo DiCaprio.

Ultimately, Collateral Beauty is a film that has fallen victim to a confusing identity. Because of its Oscar bait preconceptions, its lack of technical prowess made it an easy target for critics. Additionally, its trailer painted it as more fantastical and inspirational than it actually appears to be. These false identities made it hard for audiences to connect to the film. Collateral Beauty is a quirky holiday film that nicely fits a Hallmark movie aesthetic. Some people will take that to mean that it’s a bad film, but it’s not, Collateral Beauty is just not the film most expected it to be.