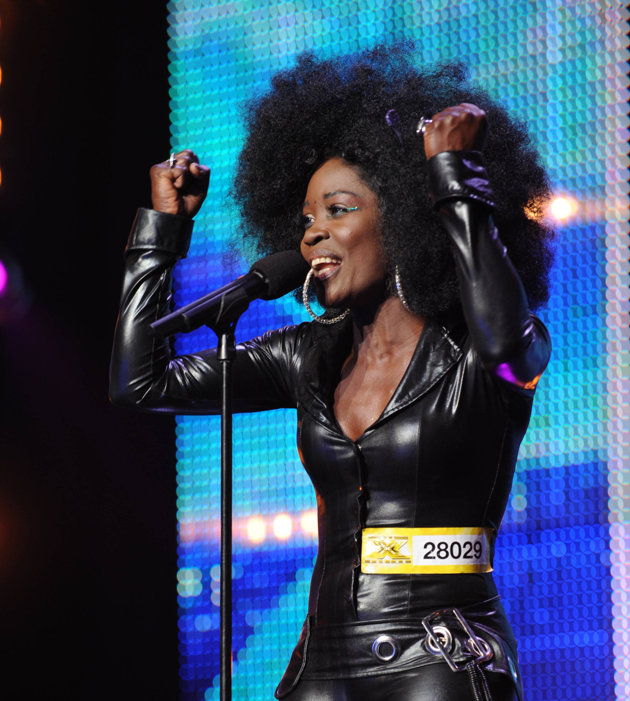 The third season of Fox’s X Factor returned with major changes to kick off the show’s premiere on Wednesday night. Taking note from the format of rival talent show “The Voice,” this time around instead of allowing the judges to steal the show, the production team and the “powers that be” decided to axe that tid bit to instead refocus airtime more on the up and coming talent in lieu of focusing on the already established judges’ panel’s celebrity statuses. It was a quick, concise, to the point episode presenting another new change to the show, which is cutting down on the horrendous and humiliating auditions and swapping them in to showcase more of the multitude of talented hopefuls trying their shot at auditioning on a major platform. One stand out audition of the night in particular was 54 year old Lillie McCloud. The baby-faced grandmother draped in a leather cat suit and donning a huge fluffed out â€˜fro took the stage by storm the moment she introduced herself to the panel. The singer, who looked more like a 25 year old than a 54 year old, was met with gasps of disbelief from the studio’s onlookers upon revealing her age. The mother of three and grandmother of seven belted Cece Winan’s gospel track “Alabaster Box” which may not have been a familiar song to many in the audience, but the soul, hope, disappointment, and dream protruding from every note and facial expression seeped from her being and emoted to one of the best performances of the night. With her demanding yet soft and whimsical voice reminiscent of Whitney Houston (as pointed out by judge Demi Lovato), her charming attitude accompanied by the fact that 54 year old can look so good while facing so much adversity in her personal life, proved to make Lillie a winning combination. She was the first of the season thus far to receive a standing ovation and the powerhouse brought two of the judges, Kelly Rowland AND Demi Lovato to tears. By the end of her audition she earned a unanimous vote to move forward by all the judges. We’re excited to see more from Ms. McCloud in the upcoming weeks because in the words of Simon Cowell “She nailed it”! Watch Lily McCloud rip the stage (and “the heart out of Demi Lovato’s chest”) below!