I Don’t Owe Anyone an Explanation About My Hair 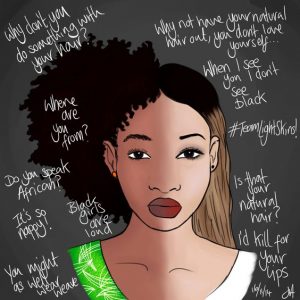 In a Philadelphia lyft an hour before I had to be to work, I opened my pocketbook and pulled out a silk head wrap while the car stopped in traffic. I quickly opened my front camera, using it as a mirror while I wrapped my two week old wash-and-go into a neatly tied bun. Between the chaos from school and my work schedule, I was unable to tend to my hair. As a black woman with natural hair, I understand the importance of time management when it comes to taming a curly fro. Instead of morphing my crusty and dry wash-and-go into a bun or tucking it under a wig, I decided to go with a wrap. I didn’t think twice about my decision until I arrived at work.

I entered the front door of my job and immediately traveled to the break room to grab a drink of water before I retreated into my workspace. I noticed a long glance from across the room. It immediately dawned on me that the stare was not at me but at the black wrap on my head. The idea of going out on the sales floor in front of management and coworkers with a head wrap on suddenly filled me with anxiety and embarrassment. I suddenly retreated to my eight-year-old self during the time when my mother would send me to school with a too-tight bang. I couldn’t even recall the last time I felt like an oddball because of my hair.

It was especially ironic that I feared being seen wearing a head-wrap being that I shaved my hair completely off less than a year ago and my self-confidence skyrocketed. What was the difference between rocking a bald head and a head wrap? Why did I consciously accept one look over another when they both encompassed the beauty of my womanhood and blackness? I realized that I did not have time to fret over the head-wrap. I pushed the silly notion out of my head that I was “under-dressed” for work and emerged onto the floor. One of the new managers approached me with a smile on her face. Her thin brown ringlets were dripping in gel to accentuate the extremely loose S-curl that she had- A typical hairstyle that Caucasian women wore to work when they did not have time to “blow-dry” their hair. A hairstyle that has been widely accepted all over.Â “Okay, I see you’re wearing your scarf today” she mentioned with a smile.

There were two things in her statement that immediately sent me into the deep end: the first was that she had mistaken my head wrap as a “scarf.”Â  She denounced the traditional African headress to the mammy stereotype that is attached to a black woman whenever she is seen with one on. Secondly, she said, “your” as if this was a reoccurring thing. This was the first time that I had ever shown up to the workplace with a head-wrap on. She categorized me with all the other black women who worked at the job. Somewhere along the line someone had beat me to wearing a head-wrap, and in her white-conscious mind we were all the same.

The first thing that escaped my mouth was a brief chuckle. Before I knew it my mouth was moving faster than my thoughts.Â “Excuse me?” I tossed back with my hands on my hips. The offense that I felt was clearly written on my face, because she began to back peddle.Â “You always have a scarf on your head,” she said with another smile as if her reasoning was enough to back her statement.Â “I wore a head-wrap once, you have me confused with the other women who work here,” I tossed back before I walked away from her.

My mind instantly dialed back to the presentations of the other women who worked at my job. I recollected the wide-eyed glances the black women I worked with received when they tried a new hair color, texture, or wig. I could not help but compare the hard stares to the polite compliments that the white women receive when they decide to get a press and trim. This was merely the beginning of awkward and ignorant conversations around my black hair.

A week later I showed up to work with yet another hairstyle. I spent over ten years of my life modeling short processed hair. During my Junior year at college I mustered enough courage to shave my hair off. Shaving off my hair removed more than just damaged ends. I was able to dismantle the insecurities I felt surrounding my natural hair as well as redefine the standards of black beauty. Almost a year after my big chop, I can finally enjoy the luxury of diverse hairstyling, one of the many advantages of being a woman of color. My variations of hairstyles were also a form of protection for my growing natural hair. I decided to give my extensions a break and sported a successful wash-and-go. As I approached my workstation to start another day of work, the same manager approached me.Â She smiled her same thin smile and this time she said, “Okay, short hair don’t care.”

It was in that moment that I questioned a few things: whether or not I should report this manager to Human Resources, if I should retreat to just to wearing extensions again andÂ  I even began to question the limitations placed on black women who are forced to exist in white spaces. Growing up in a predominantly black neighborhood, school district, and home I was engulfed in blackness. As I grew as an adult, I appreciated the ways that black women were able to affirm their identity through hair and style. All of the depictions of black women that I grew up on were tightly weaved together through their distinctive physical attributes– their hair. Although, as black women we are succumbed to follow the eurocentric ideology of beauty which includes long, straight hair. I never had to second guess the appearance of my hair until I started working in white spaces.

Women as a whole go through a lot to be “accepted” in today’s society. The image of appropriate beauty is surrounded around whiteness. But as black women, what we go through is much deeper than that. It’s one thing to fear wearing your natural hair because you may not be perceived as “beautiful” as the sister who is sitting across from you with her finely pressed Brazilian hair, but quite another to be afraid to wear any non “traditional” hairstyle at work. Even when I opt to wear some form of straight hair to work to conform to the beauty norms that society has put in placed for women, I still continue to endure comments surrounding the drastic change that I have made. They are not always dressed as obscenely as the comment I received above but they fall into the category of, “How do you get that curl?” “Is that all your hair?” “Did you have to perm your hair to get it that flat?”

As I’ve gotten older I found that hair gives black women the means to have some control over how other people perceive us. Through our hair we are able to establish our own personality while upkeeping traditional hairstyles. Regardless, if we decide to wear an afro, braids, locs, pixie cuts, or weaves in white spaces we are only exempt to one hairstyle. God forbid the day that we decide to show up to work with something a little different than the day before. We are immediately put on display.

I remember as a young girl walking through the hallways of school with a new hairstyle to the admiring gazes of my classmates. The tingly feeling that I would get whenever my mother would style my hair in french braids or a press has turned into fear as an adult. The admiration that I feel about my growing hair turns into anxiety whenever I step foot into work.

Because I’ve lived in black spaces for such a long time, I never felt self-conscious about the way I wore my hair. It was not until I began working in white spaces that I realized my perception of black beauty was not what other people saw. But the grave feeling that I felt whenever I changed my hair served as a constant reminder of the institutionalized prejudices and biases that follows women of color wherever we go.

As I retreated home after the work day I took a good look at myself in the mirror. I thought about the young black twin girls from Malden, Massachusetts who were removed from class because their “box braids” violated the school’s dress policy. I thought about all the black women, young and old, who have ever felt like they had to change their hair to fit into spaces that were not created for us to exist in the first place.

I took all of this in and I decided to change a few things. The next day I arrived at work, this time I wore a red head wrap instead of a black one.