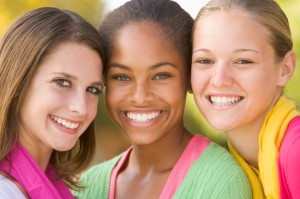 Life for a teenage girl has never been described as easy. It wasn’t for my mother, my grandmother, or for me. Some reasons were completely different, but some were the same. My grandmother grew up in a time when women were blatantly treated as second class citizens. My mother came of age post women’s liberation, yet still fought hard to crack through glass ceilings. I, on the other hand, was raised in a time when it was not uncommon to see female CEO’s, University Presidents, business owners and millionaires. Women were taking charge of their own destiny in growing numbers. However, as a teen, I often recall feeling isolated and that my life “sucked”, despite the successful women I saw in the media. I didn’t feel pretty enough, smart enough. I wasn’t sure where I fit in. Many of my sister friends of various generations recount similar feelings to me. What did we all have in common? Puberty!Â  That period of awkwardness and uncertainty that feels like it will never cease. But, like my grandmother, mother and other sister friends, I forged through and came out on the other side, virtually unscathed with no long term consequences.

Today, as I watch my daughter and her tween/teen peers, many days I feel a sense of panic and worry. “Growing up girl” in our modern time is an experience that truly is unlike my generation (and I’m not yet 40) or generations before me. We are dealing with very different times.

Relational aggression is a huge problem. It is showing signs as early as elementary school. Relational aggression is the use of exclusionary or hurtful behaviors to undermine another person’s self esteem or groups status causing harm to relationships , i.e, Refusing to talk to a peer, excluding Â someone from the lunch table, not inviting a peer to a party/gathering, kicking a friend off a buddy list (instant messaging) or social network site (Facebook/Twitter), Ignoring a peer during activities such as sports/clubs, gossiping/starting rumors (The most common form of RA), teasing/name calling, shifting loyalties and betraying confidences. The list is endless. Relational Aggression is often covert, using computers and cell phones. The perpetrators are often, popular kids, and “good kids from good homes.” These interactions are aimed at hurting others through purposeful manipulation and damage of peer relationships. Research has found that this behavior is most prevalent among girls.

Self esteem and body image issues plague a growing numbers of girls.Â 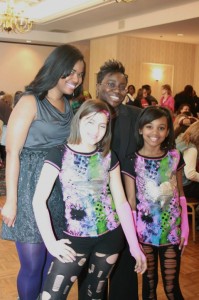 Everywhere they turn, they are getting messages of what is and isn’t acceptable. Who and what are cool. Who is pretty and who is fat? These messages are from peers, from the media, and most importantly from their mothers. Is it any surprise when a 10 year old says that she hates her body and needs to diet, if this is what she hears her mother say on the phone to her girlfriends on a daily basis? What message does a mother send to her daughter when she is in a constant cycle of dieting, tanning, Botox, and cosmetic surgery? How can a daughter believe her mother when she says, “You are beautiful just the way you are”, if her mother doesn’t apply that to her own life? If mommy is a slave to her weave or wig, it is a natural progression that Little Miss is going to want to be just like her Mommy, and frown at the thought of embracing her natural hair. Our children are the best and the worst of us.

To make things even more complicated, we are raising our girls in a world where round the clock media blitz exposes them to many things that are beyond our reach and often times out of our control. Reality television has set the women’s movement back fifty years and is sending girls the message that they will be rewarded for behaving badly. From shows like Jersey Shore, Basketball Wives, Â Keeping up with the Kardashians to Housewives of,Â  “wherever,” girls are getting the message that you can become rich and orÂ  (in)famous for being outrageous, sexually provocative, narcissistic and pushing boundaries. YouTube, Face book, and Twitter give children access to their own 15 minutes of fame yet few are prepared for the firestorm of consequences that often accompany the use of social media. Life on the internet and social media is a digital tattoo. Unfortunately, it does not come along with an “Ooops, I didn’t mean that”. There are no do-overs in the land of the cyberspace.

Puberty in itself is tough enough. Now, add in the pressure to participate in the social media whirlwind, and a dose of relational aggression. That is a recipe for pubescent thunderstorm. What is a girl to do? What’s a parent to do? First, a lot of praying and constant, consistent parent child communication. Then its imperative that parents seek out a wide array of resources.

The Glam Squad provides some essential resources. Â The No Boys Allowed Teen Tween Expo for Girls (and Moms) strives to provide tween and teen girls with skills essential to navigate the hills and valleys of “growing up girl” in our modern culture. It features topics such as “Essentials of Friendship” , “How to Talk to your Daughter About Sex”, “Priority Setting for Moms and Daughters” and “Identifying Healthy Relationships” and more. Workshops are facilitated by industry professionals and are for Girls ONLY,Â  Moms ONLY, and Mother and Daughters together. Everyone has their own safe space to seek guidance and share struggles/strategies,Â  as well as Â successes. The event has been received so well by girls and parents alike, The Glam Squad is receiving out of state requests for the event.

The next expo will be held on Saturday, October 1, 2011 in Bethlehem, PA. We are pleased to add to the 2011 line up: The Project GLAAMM ANTI- Pageant. This event will be a total departure from the negative imagery of pageantry, and focus on INNER BEAUTY. Girls will compete in areas of leadership, community service, creativity and individuality. Girls ages 10-18 are encouraged to enter. Â The Glam Squad prepares girls for a fabulous future, inside and out. If you have a “Growing Up Girl” topic/questionÂ  that you would like advice on, or for more information on events please email info@projectglamsquad.com or visit www.groovebyglamsquad.com