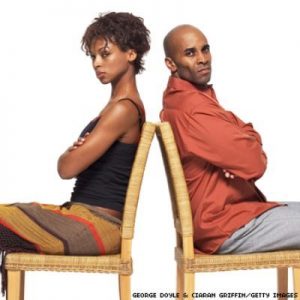 The topic of Black women “settling” in order to have a relationship has been a hot topic for some time and has sparked some really intense arguments.Â  It has been endlessly debated and analyzed, and we have come to some very interesting conclusions about what has contributed to this so-called dilemma that we face.Â  I have heard the story time and time again and it has gotten old.Â  I get it.Â  We are losing in the game of love.Â  It’s the story we love to tell.Â  And the more we tell it, the greater the divide becomes.Â  Â On one side?Â  Well-educated, professional, self-sufficient, and just plain “good” women. On the other? Â All men.

And the men have their stories, as well.Â  It seems that a quite a few of them hold the belief that as “accomplished” women, we are being too unrealistic in our expectations relative to relationships. Â Some just want us to relax and soften up a bit; to stop pressing so hard. Â Some are just asking for a break.Â  After all, they are good guys who are willing to commit, but because they don’t have huge bank accounts and advanced degrees, we aren’t willing to give them a second look.Â  Others are just arrogant; content to take advantage of our stories about skewed ratios, using every opportunity to exploit women for their own benefit.

For some reason, we just can’t seem to get it together. We have drawn a line in the sand and neither side is willing to cross. It’s us against them and all of us are losing. We don’t seek reconciliation, as most would insist is their intention. We want to air our grievances and justify our positions. We want to be “right”.

As women, we can become so emotionally charged that we often fail to see that we are stuck in our need to complain about what we are missing.Â  We want the world (the men) to know why we are frustrated and why we won’t settle for less than we deserve. Â We have stopped listening.Â  We can’t hear our men asking us to meet them halfway.

And our men?Â  They fail to hear the pain that fuels our frustration and are often way too quick to dismiss that pain as bitterness.Â  They look at us and see anger.Â  They have stopped listening.Â  They can’t hear our hurt or that underneath it all, we are merely expressing our desire to be loved, protected and valued.Â  And so it goes.Â  A never ending cycle of “he-said, she-said”.Â  We are like hamsters on a wheel; tiring ourselves out with a conversation that doesn’t lead anywhere.

In the end, what do we really want?Â  Do we want love or are we satisfied engaging in an argument we will never win? Â We have the ability to choose.