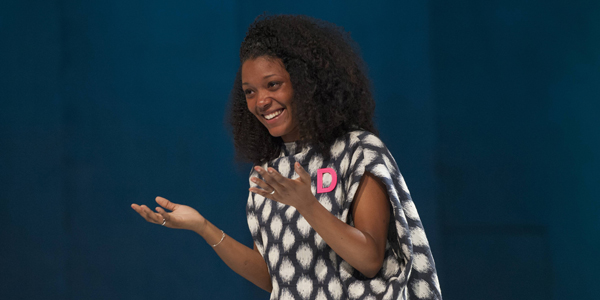 The season 12 finale of Project Runway aired on Lifetime Thursday night and the season ended with Dom Streater, a 24 year old from Pennsylvania being crowned victorious against fellow finalists Justin, Bradon, and Alexandria. The episode aired for viewers on the 17th though the finale always really happens in conjunction with New York Fashion Week with the finalists displaying their collections before being put in the hot seat to be judged by the panelists for the last time. Streater who had been rejected from competing in seasons 10 and 11 was chosen to compete for season 12. Her inspiration for applying to vie for an opportunity on the hit show was at the urging of her best friend upon graduating college. She describes her collection as fun, full of bold prints, and color as well as inspired by “city girl” life.
Along with a half a million dollars towards her collection as part of the prize package for winning, she also receives $50k of technology from HP in order to maximize her ability to manage her new business, a sewing studio courtesy of Brother, a 2014 Lexus IS350, a $100k fabric allowance from Tide Pod, a $50k styling contract with Loreal, a spread in Marie Claire Magazine, and an all-expense paid spa trip for two to the Maldives gifted from Resource Water amongst other worthwhile gifts and earnings. According to her interview with mylfetime.com, Streater explains wanting her new line to be self-titled as well as shared the idea that she’s eyeing a February debut for Fall/Winter Fashion Week. Read more about her thoughts on the future as well as her experience on Project Runway as well as watch herÂ first photoshoot with the Loreal Style team below!
http://www.stylelist.com/watch/dom-streater-won-project-runway-now-what-behind-the-scenes-at/#
by Rachelle Saint-Fleur
Photo from mylifetime.com
Video from Stylelist.com