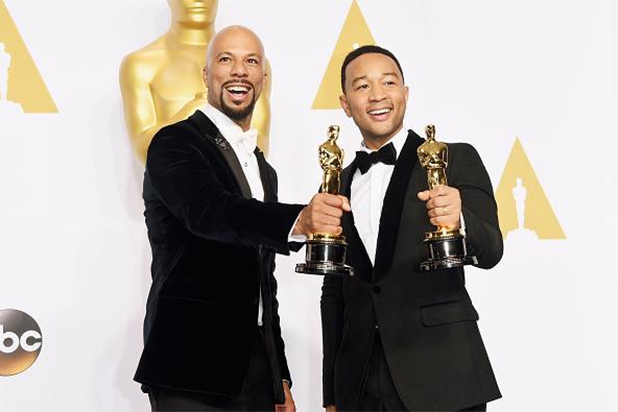 During Sunday’s 87th Academy Awards ceremony, Common and John Legend (aka Lonnie Rashid Lynn, Jr. and John Roger Stephens) won the “Best Song” trophy for their smash hit duet “Glory” from the Selma motion picture soundtrack. The song, which runs during the end credits of the film, was co-written by Rhymefest. After accepting their awards, Legend and Common delivered acceptance speeches as powerful and riveting as the song. They brought the audience to tears at the ceremony, earning a standing ovation for their performance of the song just a few minutes before they won the award. What made the performance extra special was the fact that the duo was backed by a full chorus. Needless to say, it was hands down one of the best moments of the night.

It was the only Academy Award for Ava DuVernay’s Selma, which documented the 1965 voting rights marches from Selma to Montgomery led by Martin Luther King, Jr. (portrayed by David Oyelowo). “We wrote this song for a film that was based on events that were fifty years ago, but we say that â€˜Selma is now’ because the struggle for justice is right now,” Legend said on stage. “We know that the Voting Rights Act that they fought for fifty years ago is being compromised right now in this country today. We know that right now, the struggle for freedom and justice is real. We live in the most incarcerated country in the world. There are more black men under correctional control today than were under slavery in 1850. When people are marching with our song, we want to tell you that we are with you. We see you, we love you, march on.”

“Glory” was up against Tegan and Sara and the Lonely Island’s “Everything Is Awesome” (from The Lego Movie), Rita Ora’s “Grateful” (from Beyond the Lights), Glen Campbell’s “I’m Not Gonna Miss You” (from Glen Campbell… I’ll Be Me) and Adam Levine and Keira Knightley’s “Lost Stars” (from Begin Again) for the Oscar. Previously, “Glory” won the Golden Globe for Best Original Song. Common and Legend also performed it at the Grammys. This is the first Oscar for both artists. Common and the entire team from Selma, including Oyelowo and director Ava DuVernay, celebrated the film’s nominations at a pre-Oscar shindig in L.A. Saturday night. The award became just the third given to a Hip-Hop song in the category following Eminem’s win for “Lose Yourself” (8 Mile) in 2002 and Three Six Mafia’s for “It’s Hard out Here for a Pimp” (Hustle and Flow) in 2005. Congratulations to Common and John Legend!