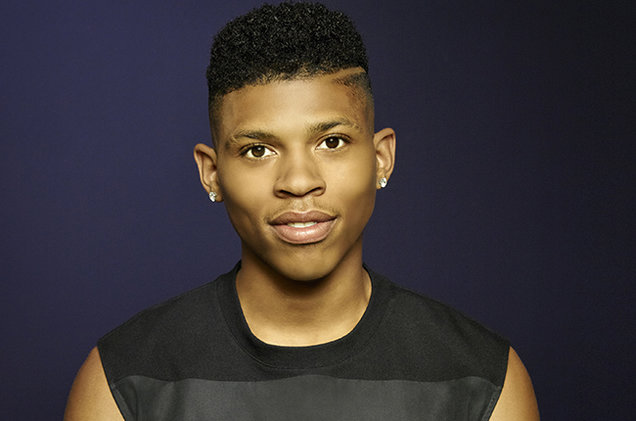 BET announced that R&B quintet New Edition will be the subject of an upcoming movie, and Empire star Bryshere “Yazz” Gray has been cast to play Michael Bivins. The three-part biographical series will chronicle the group’s humble beginnings in Boston, and their rapid rise to super stardom. It will also give a glimpse into the inner workings of the group, their personal lives, and the decision to replace Bobby Brown with Johnny Gill. Known for their early hits including “Candy Girl,” “Mr. Telephone Man,” and “Cool It Now,” the iconic boy band went through many ups and downs since its formation in 1978. Rounding out the cast is: R&B singer-songwriter Luke James as Johnny Gill, Straight Outta Compton’s, Keith Powers as Ronnie DeVoe, Elijah Kelley will be Ricky Bell, Algee Smith will play Ralph Tresvant, and Woody McClain will take on the role of Bobby Brown.

Meanwhile, Tyler Williams, Dante Hoagland, Caleb McLaughlin, Jahi Winston, and Myles Truitt are set to portray the singers in their younger days. All the members of New Edition will serve as executive producers and consultants. The group issued a joint statement about their excitement for the upcoming project, saying: “It’s been a long time coming and that time is finally here! Now that we have signed the deal, New Edition’s journey will be captured in a three night miniseries to tell our life story through our very own eyes. We are happy to have New Edition Enterprises collaborate with BET Networks’ Debra Lee and Stephen Hill, along with Jesse Collins Entertainment. From our beginning in the Orchard Park Projects in Boston to Hollywood and everything in between, just like The Temptations and The Jackson Fiveâ€”we are ready to retrace our footsteps and show everyone how we got here. For the fans all over the world, this one’s for you.”

Additional cast members include La La Anthony, Monica Calhoun, Lisa Nicole Carson, and Michael Rapaport. Chris Robinson (“ATL”) will direct the untitled miniseries, and the script was penned by Abdul Williams (“Lottery Ticket”). Principal photography will take place in Los Angeles. “The New Edition Story” has no official air date, but is set to debut on BET sometime in 2017.

AllHipHop.com recently interviewed the 22-year-old actor/rapper by phone, and Gray discussed his preparation for taking on the role of Bivins. “I’ve been working with a dialect coach. I went to Boston for about four weeks to really live that Boston life to understand where Michael came from,” Gray stated. “I was just learning a lot about him, so I can take that home with me. It’s fun.” In order to perfect the singing and dancing associated with New Edition, Gray and his fellow co-stars have been practicing for twelve hours a day. Getting the opportunity to portray Michael Bivins was obviously a huge honor and once in-a-lifetime experience for him.

“What made me interested in the project? Anything that’s legendary I want to be part of. I had to be part of it,” adds Gray. “Michael Bivins is the character that stuck out to me from day 1 when I heard New Edition. I was really lucky for them to have me play Michael Bivins, because I love New Edition so much.”

He will also be part of the Empire: Original Soundtrack (Season 2, Volume 2), which is currently available for purchase on iTunes. AllHipHop.com recently premiered “Got That Work,” the Philadelphia native’s hot new track from the compilation album.