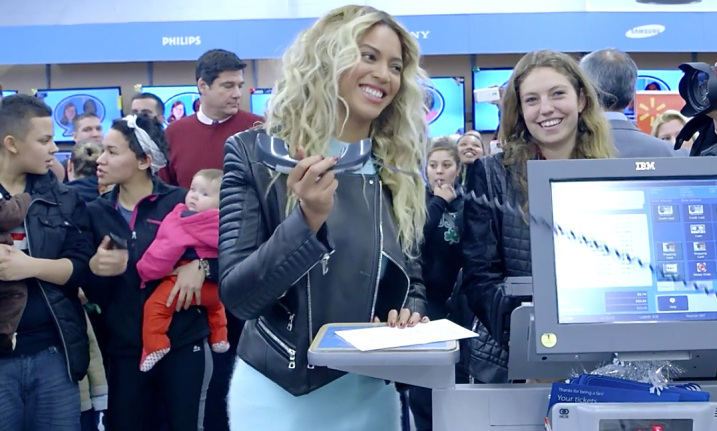 “Heyyyyy Mrs. Carter!” On Friday the 20th, the day of her latest album’s official store release,Â BeyoncÃ© drew her cards in a major way by making an impromptu visit to a Massachusetts Wal-Mart store. After revealing herself using the store loudspeaker to greet the lucky customers, she then gave 750 fortunate shoppers $50 gift cards signed “Happy Holidays from BeyoncÃ©” for their Wal-Mart purchases, totaling $37,500 worth of good cheer for the patrons. This comes directly after Wal-Mart’s competitor Target released a statement earlier this week proclaiming that BeyoncÃ©’s Friday the 13th release of her self-titled album “BeyoncÃ©” (exclusively through iTunes) would hurt stores first week sales as well as skew sales projections. Billboard.com was able to catch up with Target spokesperson Erica Julkowski as to why Target has chosen to make this decision. “At Target we focus on offering our guests a wide assortment of physical CDs, and when a new album is available digitally before it is available physically, it impacts demand and sales projections. While there are many aspects that contribute to our approach and we have appreciated partnering with BeyoncÃ© in the past, we are primarily focused on offering CDs that will be available in a physical format at the same time as all other formats. At this time, Target will not be carrying BeyoncÃ©’s new self-titled album ‘BeyoncÃ©.”
For those who were not swept up in the wave of this album release let me explain. Â On December 13th around midnight EST time BeyoncÃ© launched her 5th album with no promo, no single, and no formal release date exclusively through iTunes with 14 songs and 17 videos. A downloading frenzy ensued. Days later “BeyoncÃ©” is already iTunes fastest selling album claiming 617,000 within the first three days of its release; it’s her fifth number 1 album making Billboard 200 history as the first female to become number 1 on Billboard with her first five albums, as well as being projected already by Billboard as number 24 top selling album of 2013 as of December 18th. On December 20th the album hit all stores and music websites. I have downloaded my copy of “BeyoncÃ©” through iTunes since the initial release and love it, but for those who would like a physical copy to add to their collection of CDs, another huge retailer Wal-Mart has come with a statement saying they will be selling the album and of course it will be censored, as Wal-Mart continues to have a long standing policy against explicit albums; and this is BeyoncÃ©’s raunchiest lyrics and visuals to date. Â Amazon, Best Buy, and others are also expected to be selling as well. So if you’re looking to make this new BeyoncÃ© album a stocking stuffer for the holiday season, don’t fret. You have options! 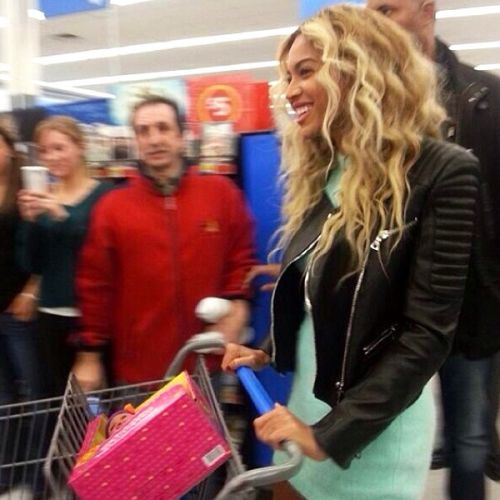 Photos from Newsone.com
Video from Youtube.com