ADDICTED: DO YOU LOVE MONEY? 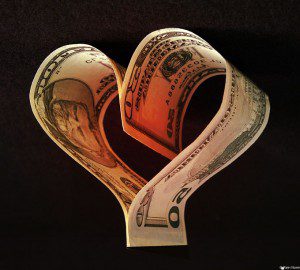 When we think of addictions we often think of people that are addicted to drugs, alcohol or cigarettes. We may also include sex and food in some of these obvious addictions, but when I think of addictions I think of something totally different, because I was an addict on so many levels and any time you find yourself so wrapped up and so hungry for a thing that you find it hard to focus on anything else, you are an addict.

In my younger years I would risk my life and my freedom for it, but as I got older I found other ways to get it and getting it became my life. Â I would work 50-70 hours a week just to possess it and the more of it I had, the more of it I wanted.Â  It caused me my social life and many important family events that I’ll never be able to get back again.Â  It caused me my health and it drained me mentally, physically and spiritually, but I still wanted it more than anything.Â  It caused me relationships with some really good men, because no man could come before it and most of all it caused me my relationship with GOD, because you can’t serve “it” and GOD, and without even realizing it I had put it on the throne of my heart and made it my god, because NOTHING was more important to me than making MONEY.

I lived to make money.Â  I woke up to make money.Â  It was the one thing that motivated me. I had all that I needed and even more of what I wanted.Â  As long as, I had money life was good, so I thought.Â  Until one day, I noticed that fluid was leaking from my breast and immediately I started thinking about death.Â  The doctor said that I had a brain tumor and it was at that very moment that I realized that my MONEY could not help me.Â  The one thing that I invested so much of my time getting was the one thing that could help me the least.Â  The one thing that I thought about night and day was the last thing on my mind, because money isn’t an issue when life hits you with issues that money can’t solve, because there are some things in life that MONEY just can’t buy and since that time my taste buds have really changed, because I’ve learned that even if I had all of the money in the world all of my problems still wouldn’t beÂ solved, so instead of chasing the mighty dollar…I CHASE A MIGHTY GOD!